In September 2015, Anthony Lewandowski, founded a religious organization, a church if you will, called Way of the Future. It’s purpose to state filings, is to “develop and promote the realization of a Godhead based on Artificial Intelligence, and through understanding and worship of the Godhead contribute to the betterment of society.” 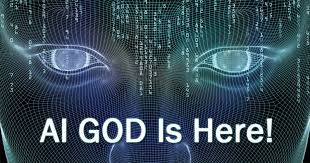 All computer programs, including AI programs, are built for a specific and narrow purpose: win a chess game, win a go game, reduce an electricity bill etc. The computer logic, even if it is advanced AI, doesn’t play well with a general will and general thinking capability that could at the same time design military strategies, marketing strategies, and learn how to play chess from scratch. For this reason,


AI deity is actually not that far-fetched, the question here is if people would actually worship it. In my opinion, a lot of people would. Although this worship would be similar to an actual expression of faith or transcendence, since a lot of essential components would be missing, people would trust such a thing to guide their lives, and assist them in all the ways possible. Humans tend to trust and obey things that seem more powerful than ourselves, SIRI, the GPS in your car, and Google search immediately come to mind.

On an intellectual level, even on a practical level people might find this deity worthy of trust and worship, but this relationship would completely lack personal, emotional, and psychological aspects people try to search for in faith. The relationship would be totally cold and impersonal, lacking the components of love and compassion.

For now, the possibility of an AI god is far-fetched, but if it does actually emerge one day, a lot of philosophical, especially ethical questions would come to play, in fear of human beings playing with something that would actually end humanity as we know it.

Futurists look at this as a very exciting outcome to human capabilities, that would let us integrate with machines, thus discovering new possibilities, like being able to achieve digital immortality by uploading copies of our brains to machines. But to many others, this possibility and system would pose a great threat and crisis to humanity.

Many people believe the singularity is eminent, the hypothesis that one day machines will be so smart that they will overcome human capabilities. And multimillionaire Anthony Lewandowski is preparing for that day, by creating an AI-based deity for people to worship.

The concept of teaching a machine to learn … and then teaching it to teach … (or write AI) isn’t so different from the concept of a holy trinity or a being achieving enlightenment after many lessons learned with varying levels of success and failure.

“Teaching humans about religious education is similar to the way we teach knowledge to machines: repetition of many examples that are versions of a concept you want the machine to learn,” Vince Lynch, the founder of AI company IV.AI, told VentureBeat. http://olayinkaoyelamicorporation.com/wp/technologies

Posted by Olayinka Oyelami at 3:31 AM